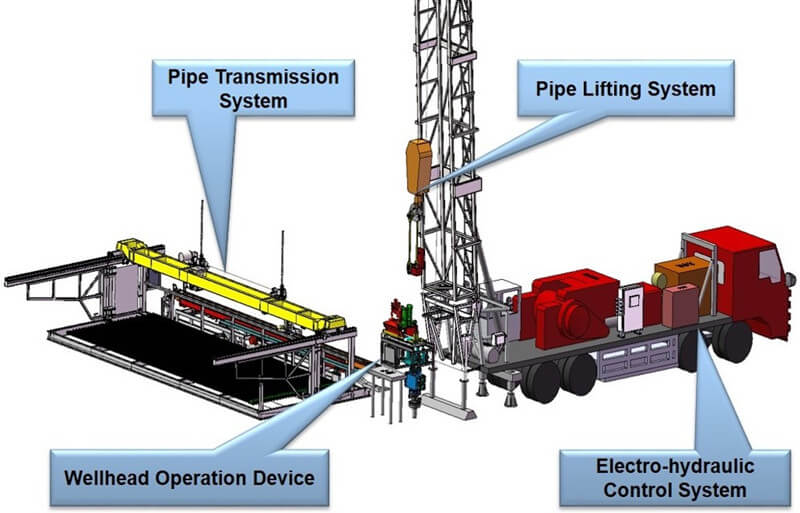 The device adopts the structural form of dispersing the functional modules and integrated installation on the workover rig: with the hydraulic tong, manipulator and anti splash snap device set on the derrick of the workover rig, which can expand and rotate, and the safety slip is installed above the BOP.

The device only needs to install safety slips, which realizes rapid installation and migration and shortens the auxiliary working time. The device has the function of moving back and forth, left and right, which is convenient to align the wellhead. The height of the hydraulic tong is adjustable and can adapt to the wellhead with different heights. Hoisting equipment and special transport vehicles are not required for the installation and removal of the device.

The main electric control box can be installed on the operation vehicle or integrated into the modular wellhead operation device. The make-up torque of various oil pipes is set on the touch screen to realize automatic make-up and break-down. Equipped with video monitoring, process prompt, safety alarm, etc. The control system has a perfect action interlocking function to ensure the safety and reliability of the workover operation process. All of the electric cabinets, sensors, connectors meet the requirement of Explosion-proof on field.

Here"s when workover operations come into play. Every time a well has production problems it needs to be repaired. In this article you"re going to be reading about one particular problem in a well and what we did to solve it. If you"re a young professional in the oil industry and never had the chance to be present in a workover operation, I invite you to go through these lines, hoping they help you knowing a little more about this amazing and unpredictable world.

A few years ago, my rig team received information about the next oil well that we would be repairing. Just by reading the well"s name we immediately inferred that we were going to deal with a really old well. The job program indicated us that this well had a high water cut, this means that most of the production of the well was formation water. We needed to isolate the water producing sandstone in order to leave an upper sandstone open to production.

The well was originally drilled in the 70´s by a split drilling rig, this type of rig was used in the past for operations on shallow waters and it was not like a typical cantilever drilling barge. In this rig, the derrick was separated from the barge and it had to be armed above the foundation of the well. This type of foundation is known as Light Rig Mover foundation and it is formed by four heads with two piles each and a square metal frame 24’ x 24’ approximately. With this particular well, we recall that old saying that states: "Don’t judge a book just by its cover". Let’s move on to the seven steps

The first thing we do before working on any well is an inspection of the location before the rig move, this is very important to determine wheatear the barge can fit in the well location or not. During this well’s inspection we could see that both the well foundation and the wellhead were not in the best condition, but this was fixable and the job could be done, though it would be a real challenge. Finally, the rig was moved and positioned on the well location.

Before removing the christmas tree in order to install the BOPs, we had to secure the tubing by settling a safety valve in the upper landing nipple. In most cases we secure the well by installing a check valve in the tubing hanger, but this well did not have an extended neck hanger, instead it had a wrap around tubing hanger which made the use of slickline tools necessary. We always make a calibration trip before running anything else into a well. In this particular case the tubing string originally installed in the well was 2-7/8”, 6.5 lb/ft from surface to 11413’, and 2-3/8”, 4.7 lb/ft from 11413’ to the entry guide at 11706’. With a Baker Hughes FH Hydraulic packer at 11415’ and an Evolution R3 retrievable packer at 11697’, five gas lift mandrels, a 1.875” landing nipple at 11704’, a 2.313” landing nipple at 214’ and no sliding sleeves. We first ran a 1-27/32” gauge cutter to the bottom of the hole at 12211’ and then a 2-9/32” gauge cutter to 11413’ locating the crossover 2-7/8” x 2-3/8”. Then, before running the valve we ran a slickline tubing scratcher in order to guarantee a good setting of it. So, after a few trips, we installed the valve at 214’ and let the well secured to install de BOP and continue the operations with proper safety.

This saved us from all the fishing jobs, which in this type of wells is at least two fishing trips (without any complications) and perhaps a few milling trips if the tubing is somehow damaged by the wireline cutters, and this represent lots of saved rig time for the well. In general, the fishing operations take from 40% to 50% of the time needed to finish a workover job. The only thing we had to do was a quick calibration trip to 11945’ with a 4-5/8” tapered mill to guarantee a good operation in our next step.

Once we retrieve an old completion string from a well, we usually run a mechanical packer to make a casing integrity test, in this case we ran an Evolution R3 packer for 5-1/2”, 17-20 lbs/ft casing (not the same one that was retrieve from the original completion, obviously), down to 11645’, 20’ above the first perforated intervals. After successfully testing the casing, the following step was a wireline job.

The last step of this workover job, after solving the bottom hole problem and replacing the wellhead, was to run the well completion. The equipment was ran down to 11402’ and it was composed by 368 joints of 2-7/8” 6.5 lbs/ft tubing, five gas lift mandrels, two 2.313” landing nipples, and a Weatherford Stratobar hydraulic packer, the completion was hanged in the new tubing head installed and then we performed the final slickline jobs to test the tubing string and set the hydraulic packer without any major complications.

This sums up our entire work on this well, leaving it ready for production. Yes, after more than 40 years of being originally drilled, this well is still capable of producing a very significant amount of crude oil. That’s how important workover operations are, if a well has the proper maintenance, its commercial life is longer and more productive. Besides, a workover operation is not as expensive as the drilling of a new well.

I think is only fair to say that each one of the steps I described include several activities that might need a little more detailed explanation to be completely understood, but it would be extending my writing too much. I also think it’s important to let readers know the reason why I decided to write about this particular well; if you look back in step 3, I said that the fishing activities take 40-50 % of the rig time needed to finish a workover job, the special thing about this well is that we didn’t required fishing activities since the original well completion was entirely retrieved just by pulling it out of the well. So, this is one of those cases when you get very, very lucky, and after a not quite good first impression we ended up successfully completing a job estimated to be done in 20 days in only 12.5 days, congrats for us!

We are committed to total customer satisfaction, achieving excellence in our operations through continuous improvement, development and empowerment of our people, and providing a positive contribution to our community.

When you have to re-enter a well, you need workover systems that quickly get you back into production. Baker Hughes well intervention and workover tools and services minimize the risk and maximize the production outcome of your downhole intervention.

Cut costs while increasing efficiency in your multizone isolation and plugging operations with our versatile, dependable drillable plugs and retainers.

You can deploy these diverse systems with an equally diverse range of conveyance options—drill pipe, threaded pipe, coiled tubing, snubbing pipe, electric wireline, and slickline—to ensure the fastest and most cost-effective workover solution for your operation.

About products and suppliers:Alibaba.com offers 225 workover rig manufacturing products. About 49% % of these are oilfield drilling rig, 29%% are mine drilling rig.

A wide variety of workover